The white-washing of black culture for economic benefit

Most if not all young Black children have heard the term “White washed” at least a couple times in their youth. As of late, it’s usually used incorrectly, thrown around loosely to refer to a Black child whose interests do not seem to align with what society deems the typical black child to act like. It’s not only erroneous to use the term in such a manner, but it’s blatantly harmful to mistakenly erase someone’s Blackness because they do not match up to what you believe a Black person should act like. However, ACTUAL white washing of black culture and creativity is something that needs to be discussed more often.

It’s no secret that Black culture is quite literally the blueprint for many trends in pop culture today. From slang, to fashion to music and dance trends, the majority of them have some form of black creativity at the root. There is nothing inherently wrong with non POCs engaging with and enjoying black culture. However, it becomes an issue when white people receive benefits for the black culture they enjoy, when the actual black creators get nothing. And unfortunately, this narrative is one perpetuated frequently as of late.

This concept is seen throughout pop culture, on social media apps such as Tiktok. The Renegade for example, an extremely popular dance and trend was created by a 14 year old Black girl named Jalaiah Harmon. A white creator named Charli D’amelio had popularized the dance, and got a lot of recognition and followers from it. It wasn’t until later, that people realized Charli actually wasn’t the one who created the dance, and the version that her, and a lot of other white creators on the app were doing was a watered down version of the original.

After noting the disparity and public outcry from the Black community, a lot of the companies who had originally associated the credit with the white creators, did their best to ensure Jalaiah was included in the festivities as well. For example, the NBA had originally invited a bunch of white creators to dance at the All Star game, but made a late addition and added Jalaiah. Unfortunately, this was not the only inequality.

Recently, Forbes released a list of the highest earners on Tiktok this past year. Coming in first and second was Addison Rae with $5 million dollars, and Charli D’amelio with $4 million, both two of the white creators that were originally invited to the NBA All Star game. There were no black creators on the list.  It is estimated that Jalaiah’s net worth is $100,000, even though she is the one who made the dance that gave the aforementioned creators a lot of their fan base.

It’s crucial to note that this is not to say that Charli, Addison, or any white creators specifically are at fault here. But it is imperative to explore why this same story keeps playing out. The truth is, society loves black culture and creativity, but typically only when it comes from non-Black people. This is a subset of systemic racism that needs to be rectified. 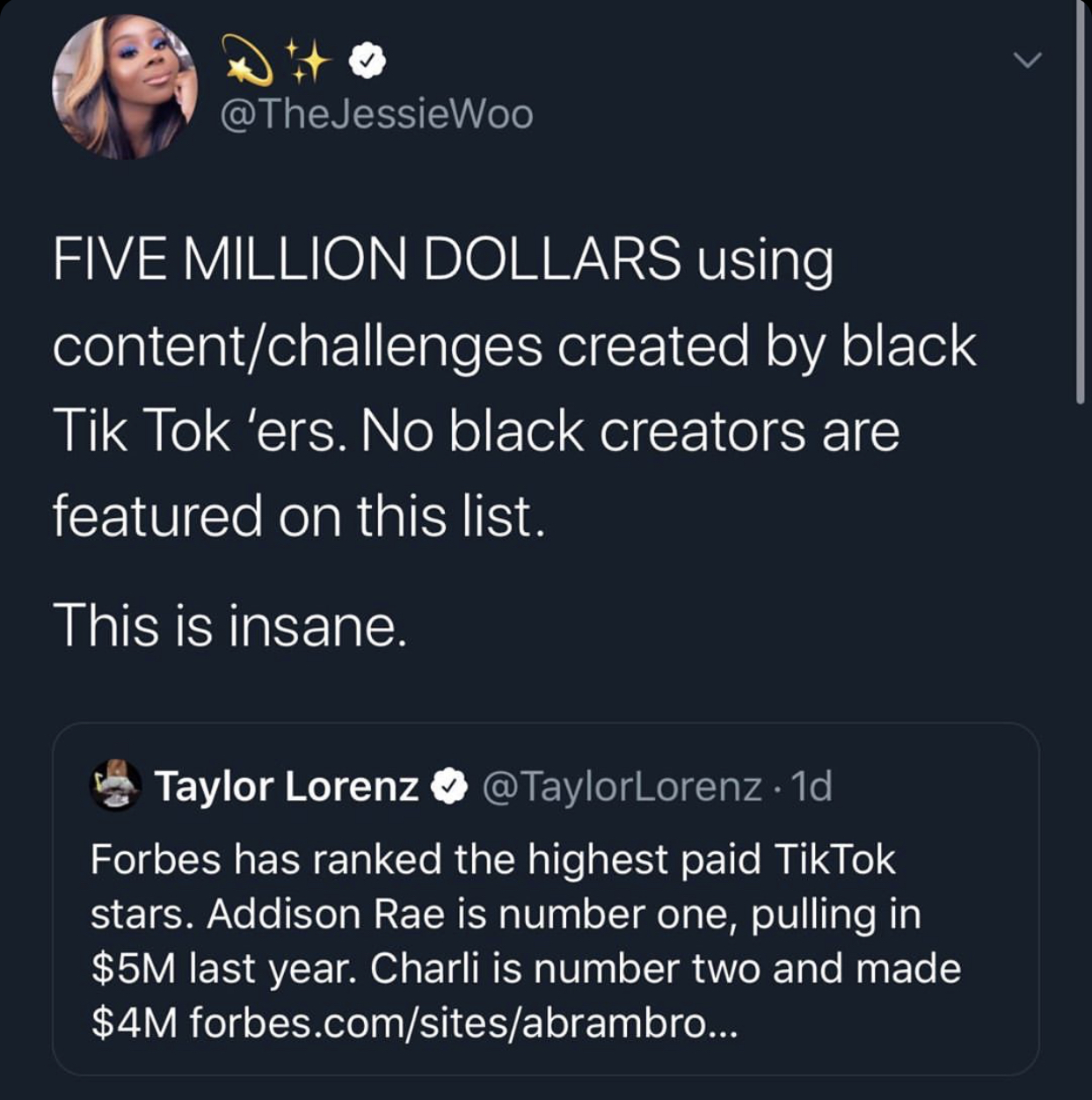 Non-Black people profiting off of black culture and creativity is not only limited to dances. A lot of non-Black creators also have recently gotten called out for adopting the “blaccent” or using African American Vernacular English to be funny, which in turn helps them build their career on social media. This is problematic because of the double standard. When Black people use slang and AAVE, it’s seen as “ghetto,” but when non-Black people do it, it’s seen as comedic, and they make profit off of it.

Black Entertainment Television, or BET, is a network specifically creating Black content but is owned by a white person. The movies and shows that they create are all about Black culture, and marketed to Black people, but a white person is the one making money off of it. Even when it comes to Black hair care, a lot of the brands that are created specifically for and marketed to Black women, are owned by white people. And when it comes to beauty supply stores, they are almost always owned by non-Black people, who set up shop explicitly in Black communities to make money off of Black people. Whilst doing this, they tend to monopolize the business, specifically so that Black people cannot get into it to make money with their own culture.

The concept of non-Black people making money off of Black culture is not a “one and done” type of thing, as this has been going on repeatedly throughout history and present times.

In closing, there is absolutely nothing wrong with appreciating Black culture. Indulging in the music, dance and even the food created by Black people is not only completely fine, but it’s welcomed. However, the issue lies in the fact that non-black people continuously monopolize and make money off of said culture, when the Black creators get next to nothing. Black culture is not your “comedic relief,” nor is it to be your marketing tactic. It is imperative that we love Black people just as much as we love the culture, and always make sure effort is made to give ample credit where credit is due.